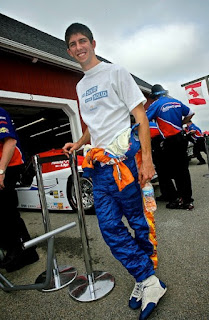 Corvette Racing has won eight ALMS titles and seven class wins at Le Mans; to hire a driver as young as Taylor shows that the team thinks a lot of his skills and potential.

“The level of competition in the 2011 American Le Mans Series GT category was intense, and we expect it to be just as fierce in 2012,” said GM Racing Director Mark Kent on ALMS.com. “Corvette Racing has been working hard over the winter to develop a complete package of cars, drivers, team, and technology that will be able to win in this extremely competitive environment.”

Taylor started his pro career in 2008 with a GT ride with Beyer racing in the Rolex 24 and a DP drive in the Brumos Porsche 250. Taylor was back with Beyer in 2009, and drove for Racers Edge in 2010. In 2011 Taylor moved to Autohaus, where he finished second in the team championship and tied for third with his teammate Bill Lester in the driver’s championship.

“Corvette Racing is one of the most iconic names in motorsports, and joining this team is a huge opportunity for me, “ said Taylor on ALMS.com. “There are certainly going to be challenges as I learn the capabilities of the Corvette C6.R race cars, become familiar with the team, adapt to new tracks, and race with new competitors. It’s going to be amazing to race a Corvette at Sebring, LeMans and Road Atlanta, and I can’t wait to get started!”

“We have watched Jordan develop as a fine young driver over the years, and when he had an opportunity to test for Corvette Racing, his performance was very impressive,” said Kent. “He is totally dedicated to racing, gives great feedback, understands how to interpret data, and knows how to make changes to the car and his driving style to suit the conditions. He has tremendous potential and we see this opportunity as an investment in the team’s future.”