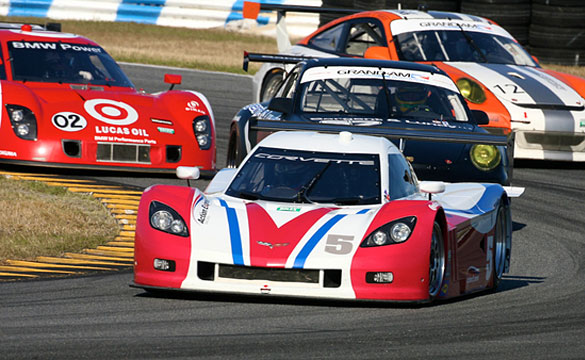 The Corvette Daytona Prototypes made their inaugural debut at the 50th Rolex 24 Hours at Daytona. After a brutal 24 hours of round-the-clock racing, the No. 5 Action Express Corvette DP led the way for Team Chevy and the Corvette DPs with a 5th place overall finish. Corvette Racing’s factory drivers in the No. 90 Spirit of Daytona Racing Corvette DP finished 8th while in GT, Tommy Milner and Jordan Taylor in the No. 88 Autohaus Camaro GT.R finished 10th in class.

The No. 5 Action Express Corvette DP had to overcome several major obstacles to earn that 5th place finish – including not being able to make a qualifying run and having to pit just after one lap of the race.

“That was probably one of the toughest 24 Hours I have done,” Darren Law said following a fifth-place finish in the famed endurance race at Daytona International Speedway. “We had a lot of adversity. We had some engine issues prior to the race, (and) we had to miss qualifying. The first, probably, eight hours of the race, we had an electrical misfire, which really cut the motor back, and we struggled.”

“But the guys worked really hard – Action Express, Chevrolet, Corvette – they all did a great job. I’m proud of the car. I’m proud of the team. … A top-five is a good start to the season, and we are happy to finish it.”

The No. 90 Spirit of Daytona Corvette DP – driven by Antonio Garcia, Richard Westbrook, Oliver Gavin and Jan Magnussen – ended up in eighth place.

The No. 9 Action Express Racing Corvette DP – driven by Terry Borcheller, JC France, Joao Barbosa and Max Papis – went to the garage at about the 14-hour mark to address a number of issues, and finished ninth.

The GAINSCO/Bob Stallings Racing Corvette DP, also driven by Jon Fogarty and Memo Gidley, did lead 19 laps but experienced a number of issues and finished 13th in the Daytona Prototype (DP) class.

The No. 10 SunTrust Corvette DP started on the outside of the front row, courtesy of Max Angelelli’s qualifying effort, but experienced suspected valve train failure after just 14 laps.

The Corvette DPs and Camaro GT.Rs will be back in action at Barber Motorsports Park on March 30-31 for GRAND-AM road racing’s second event of the season.